Background: Yuri was destined to be a warrior of mankind since his birth. Conceived on the field of battle (as his parents fondly told him), and born as the firstborn child to two firstborn parents, the outcome was never really in doubt. Yuri was raised and trained extensively in his youth learning all about the imperial forces, drills, fighting, how to make friends of his comrades, how to learn from others, and how to stay out from under the nose of the commissar. Vostroya is a cold industrial world where the populace works away in the factories of the world and the planet is run by Techtriarchs, it is a general rule that people do not look into matters that do not concern them, that curiosity is the way to draw the attention of the mutant and chaos. Yuri however had always been curious often bothering the priests of mars, asking many questions, and hoping to tinker himself. However, on Vostroya, all Firstborn children are offered to the guard, without exception or compromise.

After his training in the ruined cities and frozen landscapes as a line solider, Yuri, now 17, was sent with his peers as a reutine shipment to bolster the numbers of the 241st, his parent’s legion, fighting off in the Spinward front. The fresh contingent of the 241st that Yuri was apart of, however, was destined not to meet with the rest of it’s regiment, as when they arrived in the Calixus sector, they constantly delayed by requests of their unit to assist in defending positions, recover key tech, and assault minor enemy positions; most often alongside other foreign regiments: typically Death Korps, Calixians, and Cadians. It was during one of these engagements that a weapon malfunction, denying him of auto-fire, learned that he is actually a pretty good shot when he aims. This constant redeployment and the occasional warp-storm throughout the sector went on for years, keeping Yuri and his contingent from reaching the rest of the 241st. It was during this time that Yuri had learnt his father had perished whilst zealously fighting the tyranid scourge, a loss that made him laugh a little as he pictured his father charging headlong at a carnifex only to be swallowed whole. However despite the efforts of the contingent the rest of the 241st were always two steps ahead of them, and as soon as they would make a bit of ground would another small crisis that required “their immediate aid” would arise, which leads us to the battle of Kulth.

Yuri, now a man of 29, was sent with his contingent to Kulth when reports of Orks en-route to the plant came up. The 241st contingent, now affectionately named the “Wayward-Sons” by those whom had the fortune of their aid, landed to help prepare the defense of the planet. Remarkably, despite the intense fighting and massive numbers of green-skins and their positioning in the thick of it, the Vostroyans suffered far fewer casualties than their allies and had helped mange to fight the Orks and Dominate to a stalemate. When reports of a larger composite regiment was en-route to help take their place the “Wayward-sons” set off on one last attempt to reach the rest of their regiment before some other calamity could stop them.

One of the navigation systems of the transport craft was severely damaged when an angry power-fist of one Colonel Alexanderov of the 241st Vostroyan contingent, met it. Having been ordered to cease their route and immediately join the 99th Melgovin in the invasion of Virbius the Colonel was some would claim “not in a fine mood”. After regaining her senses Colonel Alexanderov figured that this could be a fantastic opportunity for her troops to learn new doctrines and skills of other regiments, and all in one place! Besides, it would seem the Emperor has so willed them not to meet with the rest of their regiment just yet, and so with appropriate approval will try to just wait until the 241st swings back towards them, then regroup with them.

News of yet another redeployment would had grown tiring on his mind, and the fact that he’d like to see his mother at some point (people don’t live long in the Guard, and quite frankly it’s a wonder that his mother still is) weighs too. Yet Yuri will maintain his pleasant demeanor, and hopefully learn much from his soon to be new comrades, for If the Emperor deems such, then who is Yuri to argue? Heck, It might even be fun!

Release Pending Imperial Censor Review
Letter 540
To: Anastasia R. Barrolov
Imperial Registration: VO241C397IU661894
Dear Mother,
It has been a month or so since I last wrote, mother, and for that I apologize. I hadn’t been busy as to not write to you, but I am still so perplexed by the events that have unfolded before me and our contingent.
Vostroya’s Wayward-Sons seem to have been taken from their course. We were going to make our way to rendezvous with you and the rest of the 241st at Lukius when we were called in to assist the 99th Melgovin, for the time, a regiment now completely composed of spare regiments. I’d never know there were really this many different regiments in all of the God Emperor’s Galaxy! Each have their own doctrine and uniform and style, it seems like there are enough of them here to have a representative from each planet! I’d even seen there to be the famous Macabians! I’ve yet to introduce myself to any, but I’m sure I’ll at least have the chance to do so.
They’ve taken us Wayward-Sons all and divided us from one another, mixing us in finely, like Borscht, with other regiments, I’ve only seen Mikhail and Artyom about twice since we were integrated. My new squad mates are a doctor of some planet named Noctis and a Penal Legionnaire from the scintilla hives. We are to be assigned more soldiers to our squad but we have been waiting for them for a while now. I must admit I don’t know what to make of them, I will continue to do as I was taught and treat them as comrades, and maybe, hopefully, learn something.
The assignment’s are centered mostly on odd work, we’ve been tasked with aiding Sargent-Major Alexander in whatever tasks he has required for us, which have been a mix of boring and heinous. I do not wish to delve into the details, but I must say, things outside of Vostroyan regimental standards vary IMMENSELY, and what we may consider beyond unorthodox, here are accepted. To be frank this part of the learning process is sickening.
At least our latest deployment seems to be worthwhile, we are charged with standing in as backup In case a force which is sent in to destroy a space hulk needs us. I write this now as we wait, with any hope I can get down there and get into some action. I’ve not killed anything since I’ve been here, so much for an invasion. Though at the same hope I hope our comrades return safe.
I will write you again next time I’ve a chance. Love you mother,
Your Yuri. 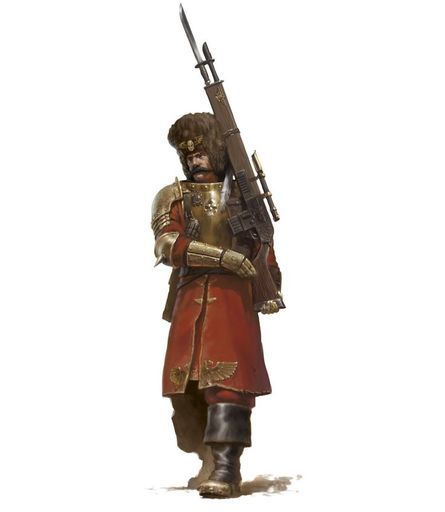