A man with the look of having seen enough to make any Trooper jaded.

Medic John Taylor, a man of instant action and thoughtful recourse (at least in his own mind) has seen a few campaigns since his initial recruitment and training.
Over the course of a few years he thinks he has seen most of anything that could shock a man. So many have died, either in battle or afterwards that he has become jaded to anything the war might throw at him. And while he will do his best to save the troopers under his care, he can’t help but distance himself and think of them as only numbers to be counted when they die.
Everything he has seen and done has led him to a lazy attitude to anything that isn’t immediately life-threatening, and will seek to push off the work to someone else or leave it to the last moment.
He has flat brown hair, what little shows from the short cropping on his head, and brown eyes. His face, while it bears some weathering has somehow avoided any major scarring or marring.
He is ever equipped with his tools of trade, kept clean when possible and rather bloody and gore encrusted when the fighting becomes the worst, as he does his job at saving the lives of his fellow troopers.

Journal entry 23343: Hives. I have never been a fan of hive worlds. The smell is almost always disgusting and pungent. Never a cool breeze when you need it, nor a ray of sunlight beyond the cold hard glare of the artificial lights. And this mission has taken us into the heart of one. Already we’ve had to deal with gang of various stripes and temperment, that could use a good look at by the inquisition. And despite our obviously brash (to the nearly suicidal point) Sargent, we’ve managed to survive our encounters with them. Add to that the unclean things that are running around in here, as well as those traitors we have fought already, and this job is turning into a real pain in the ass. But soon we’ll be back with the regiment, now that we’ve made a serious mess of some mortar emplacements (and some serious checks of the ears to see if there is any damage after that explosion) I might be able to take a half day to do nothing but relax. 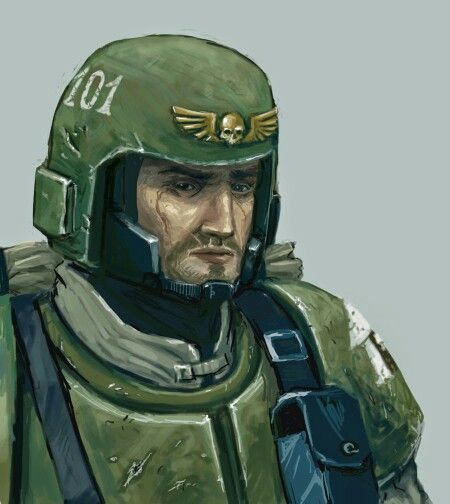