A replacement; Originally from the 212th Ganf Magnan Grenadiers, a hard-luck unit that has been broken up as replacements. Has over a decade of service, fighting Orks [on Ganf Magna], Tau and Tyrannids. Now assigned to 3rd Plt, Hellions Co., 3rd Bn. [Hell’s Wrath], 99th Mergovian Regt. [‘The Emperor’s Bastards’], one Lt. Neflan Sark commanding.

Wears full carapace armor, was issued [and maintains] a heavy stubber, laz-pistol, and knife; but has recently come into possession of a heavy bolter and bolt pistol. These have rapidly become his adoptive children. His gear is well-used but well cared for. Habitually wears a large souvenir bandana of the Ganf Magnan flag around neck.

Nicknamed ‘Twister’ because of sarcastic sense of humor. He’s always ‘twisting your words’ for a joke. He has a generally sour disposition, and much of his humor and commentary is of the ‘gallows humor’ type, although not so much as to warrant a visit from the Commissar for disloyalty.

Bio:
Originally from the world of Ganf Magna and mustered into a new regiment a decade ago. Rumor mill has it that something bad- really bad -happened to them and Munitorum has scattered their survivors across several regiments. There seems to be quite a few of them reinforcing the 99th Mergovians as replacements however.

He has shown a remarkable lack of concern over the Ecclesiarchy’s dislike and distrust of the 99th Mergovians. As far as Steher is concerned, the farther the priests stay from him, the better for all concerned.

His initial impression of his new unit is quite mixed. His company commander, Capt. Jeshrack, appears to be a woman who knows her business. But it has been Steher’s experience that the fewer officers that can place your name and face together, the more contented his life is. Therefore, most of his interactions with the good Captain have been salutes in passing.

Steher’s platoon commander is another matter altogether. Lt. Sark is clearly an idiot and, worse, is an energetic idiot. Furthermore, he doesn’t know enough about his job to realize he’s doing it wrong. Currently, Steher has a strong desire to stay as far away from ‘Lt. Suck’ as humanly possible. Hopefully the battalion will find a good platoon sergeant to train this fool up, but with all the new replacements finding that sergeant is undoubtedly difficult.

This has been offset by the platoon being ‘adopted’ by the battalion sergeant-major, SGM Alexander. The platoon has become Alexander’s go-to ‘odd job squad’ and duties have ranged from close security detail for battalion officers to training up a draft of beastmen [more on that below].

The other members of his squad are somewhat less noteworthy, which is to say ‘slightly more normal’. He hasn’t seen much of Squad Leader Sgt. Badasski or his Squad Corporal Cpl. Volkgeir, both having been told off to one detail or another.

The squad has three abhumes in it, two Ogryns and a Ratling. Otherwise, it’s a pretty mix and match crew. There’s Gdm. Faroom, the Chimera driver, who is from a feral world and has an accent thick enough to stir. The medic is a replacement from the famed Tanith One-and-Only ’Gaunt’s Ghosts’ Regiment. What Gdm. Xansus Nightroad did to end up with this motley crew is anybody’s guess. Guardsmen Allus and Bennius [a couple of veteran time-servers who do exactly what they’re told and no more] round out the team.

For the first time in his service Steher finds himself in the steady company of a Sanctioned Psyker, Psi 3rd Luther Hessman. His previous unit preferred to keep their psionic adepts in a central pool but the 99th’s doctrine is different in this regard. They send their ‘Psyks’ down to the squads to work as tactical Guardsmen. Thus far, things seem to be going alright as far a Steher is concerned but he has no real scale with which to judge the matter. Hessman seems personable enough and the Beasties get along with him well.

Recently, regiment was seconded to the Rogue Trader Litany of Woe. The regimental mission is to act as a strike force in the new offensive on this front, and support the Litany when not on Guard assignment.

Just prior to lift, the unit took ‘delivery’ of a hab-container full of beastmen, roughly a full platoon’s worth. Now, the beasties are full Imperial citizens and were part of their world’s Imperial Tithe. The problem is twofold; firstly the Ecclesiarchy believes that beastmen are a half-step away from Chaos-spawn and would burn them at the stake if they could. Secondly, the beastie’s have a low IQ and their mouths are not formed to easily pronounce Low Gothic. Communication is very difficult. SGM Alexander has had the squad training with them to develop some kind of common lingua franca in order to work together. Thus far, it’s only been very basic stuff… teaching them how to say ‘Left’ and ‘Right’ clearly and assault drills… but things seem to be going well. The beastmen hold Hessman in high regard, and that has eased things considerably.

Session 2:
Training continued aboard the Litany of Woe as the training bay was converted into a number of environments on a daily basis. Urban, Hive, and Zero-G combat training proceeded, with Steher working on choosing good positions and timing his fire to augment the teams he was working with. Big take-away from Zero-G training: move in short bursts, thoroughly brace the piece to compensate for recoil.
Steher originally had doubts about the beastmen’s tactics and the uses to which a Psyker could be used at the squad level….
No more.
Assigned by the Litany crew to conduct one of the necessary periodic sweeps of the tween-spaces within the hull, the squad divided up into several teams of mixed [beastmen and Bastards] composition and moved off searching their assigned sectors. Steher’s section included Gdm. Goldbar and a half-dozen beastmen.
With the help of Goldar’s auspex the team was able to clear their assigned area reasonably quickly and arrived at the rendezvous point only a little bit late. Rounding the corner, the team heard gunfire ahead and the sounds of tactical communications over their micro-bead radios. Moving quickly we reinforced First Section [Beastmen, Sgt. Doyle, and Psyk3 Hessman] as they began to mop up the degenerate mutants infesting the tween-decks. While the Guardsmen occupied one bend in the intersection, the Beastmen gravitated toward each other in opposite direction, with Steher in position to support either section as necessary.
The band of mutants was much larger than originally thought and as more literally poured out of the hull spaces, it initially seemed as if the Guardsman section had their zone under control with accurate lasgun fire. Therefore, Steher shift his gun over to assist the beastmen. This was when he witnessed just how effective the beastmen’s tactics could be. Instead of charging headlong into the mass of attacking muties, the beastmen fire several well-disciplined volleys into them with flamer, shotgun, and grenades. This effectively put-paid to the mutant attacks in that sector of the fight. It was well that this was so.
In the Guardsman sector, a band of a half-dozen or so VERY large mutants emerged from a side chamber and began attacking the Guardsmen at short range, moving quickly into a confused melee’. Psyk3 Hessman launched a series of mind-bolts of such power that it literally bounced him off the ceiling, but the mutant he targeted literally exploded from the strength of it. With the beastmen sector under control, Steher shifted his fire to the Guardsmen and assisted them in cutting down the remaining ‘big uglies’.
However, the power of Hessman’s bolts and the quickness by which the ‘big uglies’ reached melee range had dropped two of the team [Goldbar and Hessman] who spent the next few days in the Medicae Bay.

After returning and doing the after-action chores [cleaning weapons, replenishing expenditures, after-action reports, etc.], the remaining Guardsmen dressed out in their ‘dress fatigues’ and accompanied Col. Marn [Regimental Commander] to a meeting with the Litany’s command staff. The ship has exited the Warp [at last!] and was on station to begin the Spinward Army’s attack on the rebel world of Avithol, but for some reason the regiment didn’t deploy as expected. We soon found out why.
Col. Marn was informed that upon arrival in-system, the squadron of ships escorting and transporting the Army detected the presence of a famous Space Hulk by name of Pandora’s Bane, a legendary mass of derelict ships whose appearance has always spelled disaster for the Holy Empire wherever it went. There is concern that it’s presence here, at the point of attack for the entire Spinward Front is no coincidence.
[more later] 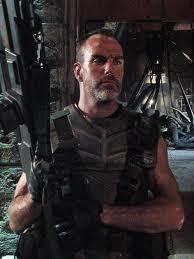